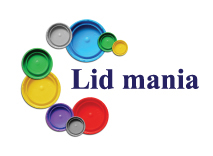 Should you wish to share information about the international competition, feel free to use the prezentation of “Lidmania’2014″ below. Just press the picture and you have got it!

An international competition “Lidmania 2014″ has been launched in the UK

An international competition of plastic lid collection “Lidmania 2014″ has been launched today. All London’s educational institutions, families and random persons, anyone who cares about ecology, is invited to collect plastic bottle lids and create works of art out of them.

“We have been announcing the competition “Lidmania” in Lithuania for three years already. I know that some of last year‘s contestants haven‘t stopped collecting plastic bottle lids even after the end of the competition. To many it has become a habit to take a lid found on the street or in the forest, put it in one‘s pocket, and take it to a separate box at home specially meant for lids. The competition has been very successful in Lithuania, thus I believe that when launched in the UK, it will become a success here in London, where I myself currently reside, as well. There will be two countries competing, the best artworks will be brought to the international exhibition in London from Lithuania. We are planning to expand the competition to other countries in the future.” – says the initiator of “Lidmania”, author of EcoEthno.co.uk Birutė Jakučionytė.

“In 2012 JSC “Plasta” has successfully recycled nearly a ton of collected plastic bottle lids, and last year more than four tons of lids have been collected and recycled. Our company is happy to be a partner in this project and it is natural that the competition has gone beyond the borders of Lithuania and become international. We have recently established a subsidiary company in the UK, thus we surely will support this competition there as well.” – says the Director of Sales and Marketing Department of Europe‘s largest recycler of secondary polythene waste JSC “Plasta” Mindaugas Rakauskas.

Elzė Rudiene, Marketing Manager at Public Institution „Žaliasis taškas“ states, that “The success of this competition has shown that all of us together are able to achieve tremendous results even doing little things. It is great that we can share the experience and practice of such a great competition with our colleagues in other European countries. This is a great means to foster the idea of ecology, the importance and benefits of litter sorting.”

“By reducing the amount of wasted plastic bottle lids, we contribute to a cleaner environment and a more efficient use of resources. This competition has proven that children can be a lot more interested in plastic lids rather than in various toys advertised by different traders. The competition raises the excitement and schoolchildren create works that soon will be eligible to compete in international green design competitions. Competitions like this really makes our planet greener” – says Inga Labutytė, the Editor of Grynas.lt

The duration of “Lidmania’2014″ in the UK: June 10th, 2014 – November 7th, 2014. The participants will collect plastic bottle lids and also will have the opportunity to create works of art out of them. The competition final and artwork exhibition will take place on December 1st – December 10th, 2014 in London.